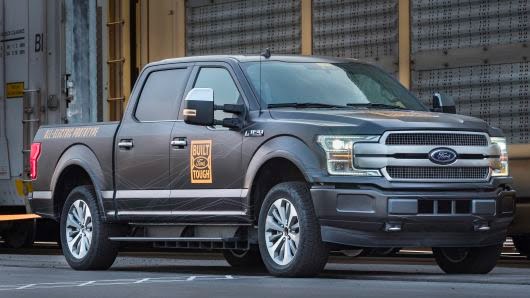 DETROIT — Ford is going on the offensive to defend its highly profitable pickup franchise from emerging all-electric truck competitors such as Tesla.

A month after Tesla CEO Elon Musk said his company’s planned electric pickup would “be a better truck than an F-150 in terms of truck-like capability” during a podcast, Ford on Tuesday released a video of an all-electric F-150 pickup prototype truck towing 1.25 million pounds of double-decker rail cars carrying 42 F-150 pickups.

The towing weight shown in the video is roughly four times more than the 300,000 pounds Musk tweeted Tesla’s pickup would be capable of towing last year. However, Ford was quick to disclose that the video is a demonstration of capability and “far beyond any production truck’s published capacity.”

“This demonstration showcases our commitment to remain the clear leader in trucks as well as to highlight our commitment to the future of electric vehicles,” Ted Cannis, Ford global director of electrification, wrote in a post on Medium accompanying the video.

Releasing such a video is an uncommon practice for Ford, which traditionally wouldn’t publicize much, if anything, about a vehicle that remains years away from production. It shows the importance Ford has on retaining its sales leadership with the F-Series, even for all-electric trucks, according to Michelle Krebs, senior analyst at by moCox Automotive.

“F-Series is everything to Ford. It is the cash cow of Ford,” Krebs said. “The company would be a niche automaker if it didn’t have F-Series.”

Ford’s overall business heavily depends on its F-Series truck, which has been the America’s bestselling truck for 42 years and the country’s bestselling vehicle for 37 years. Ford sold more than 1 million F-Series trucks globally in 2018, averaging a sale every 29.3 seconds.

The company, which has slashed thousands of jobs this year, is realigning its workforce and investing $11 billion by 2022 in electric and hybrid vehicles. Investors seem to like the plan so far. Its stock, which has struggled in recent years and was trading under $10 a share just a few months ago, is up by more than 33% so far this year.

“We are dead serious about delivering an electric pickup truck that again sets an all-new bar for what light duty trucks can deliver — not in the science project sense, but in the reality of what tough trucks need to do,” Cannis wrote.

While all-electric vehicles remain a niche market and no major automaker has released an all-electric pickup, buzz around EV pickups has increased as nontraditional automakers such as Tesla and Amazon-backedRivian prepare to enter the segment.

“This whole electric-vehicle pickup truck discussion has become a game of one-upmanship,” Krebs said. “Ford is not going to let Tesla stand unchallenged.”

General Motors CEO Mary Barra earlier this year confirmed the Detroit automaker also is in development of an all-electric pickup, however that vehicle is still expected to be years away as well.

The all-electric F-150 prototype used in Ford’s video is separate from an upcoming all-electric pickup Ford announced in April as part of a $500 million investment in Plymouth, Michigan-based Rivian.

Compared with pickups with traditional internal combustion engines that use gasoline and diesel, all-electric trucks are expected to offer higher instantaneous torque for towing and hauling as well as other work site applications for fleet and work truck buyers. Not to mention, zero emissions.

Tesla did not respond to a request for comment.

To learn more about Ford’s Electric Truck, contact us today!