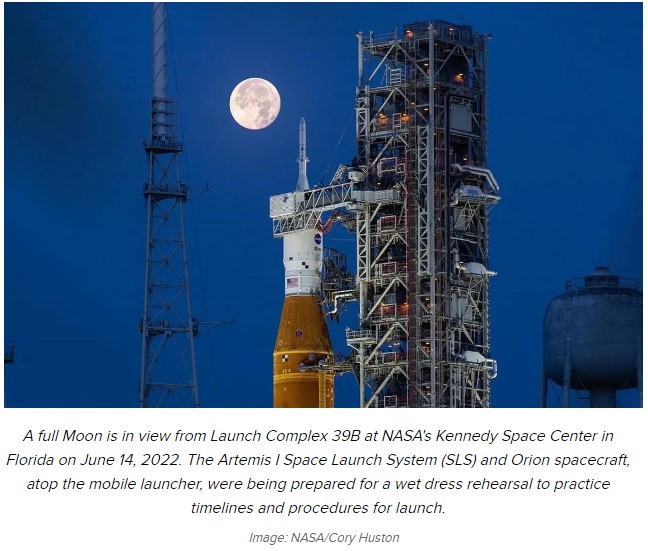 NASA on Wednesday announced that it plans to launch the Artemis I mission around the Moon as early as Aug. 29. The unmanned mission will serve as a test of NASA’s deep space exploration systems, ensuring the agency is ready to send astronauts to the Moon and beyond.

Nothing is certain. NASA’s preparations must stay on track, plus the weather has to cooperate — the launch dates fall at the peak of hurricane season.

Artemis I is the first of three missions that will culminate with NASA landing the first woman and first person of color on the Moon. The Artemis mission, named after Apollo’s twin sister, will help NASA establish long-term exploration of the Moon in preparation for human missions to Mars.

Preparing for Artemis I has been a long journey so far. Even taking the SLS and Orion to the launchpad is a major event. In March, NASA moved the 322-foot tall, 3.5-million-pound spacecraft and rocket to the launchpad for the first time. The trip from NASA’s Vehicle Assembly Building to the launchpad was just four miles — but it took nearly 11 hours.

Over the past few months, NASA has been carefully testing its timelines and procedures in preparation for launch. The agency made repairs to its vehicles after what’s known as a wet dress rehearsal.

The Artemis I mission has three main objectives. Its primary goal is to demonstrate that Orion’s heat shield can withstand the high speed and high heat it will experience under lunar re-entry conditions.

When Orion returns from the Moon, it will be traveling about 24,500 miles an hour, or Mach 32, Artemis mission manager Mike Sarafin said to reporters Wednesday. The spacecraft will experience temperatures half as hot as the sun outside the heat shield.

“That is much faster and much hotter than the temperatures we see when we return from low Earth orbit,” Sarafin said.

The heat shield has undergone extensive testing on the ground, he said, but no aerodynamic or aerothermal test facility can recreate the conditions of returning from lunar orbit.

Artemis I’s second objective is to demonstrate the operations and flight modes of the rocket and the spacecraft — all of the facilities across all of the mission phases. During the flight test, teams will verify the launch vehicle and spacecraft systems such as the communications, propulsion, and navigation systems.

As part of this objective, NASA is looking for further confidence that Orion, while carrying humans, can tolerate the extreme thermal environment of deep space. Orion’s main engine and the solar array wings will need to work as designed, and the operations teams will need to manage the vehicle across all the flight phases, from pre-launch to the return back to Earth and recovery.

The third objective is to retrieve Orion after splashdown. While engineers will receive data throughout the mission, retrieving the crew module after splashdown will provide information to inform future flights. There will be three mannequins aboard the spacecraft that will help NASA understand how the vehicle fared.

After splashdown, technicians will conduct detailed inspections of Orion, retrieve data and reuse components, such as the high-precision avionics. It will also allow NASA to demonstrate its recovery techniques and procedures ahead of future crewed flights.

The mission has other, non-critical objectives, such as deploying 10 cubesat payloads.