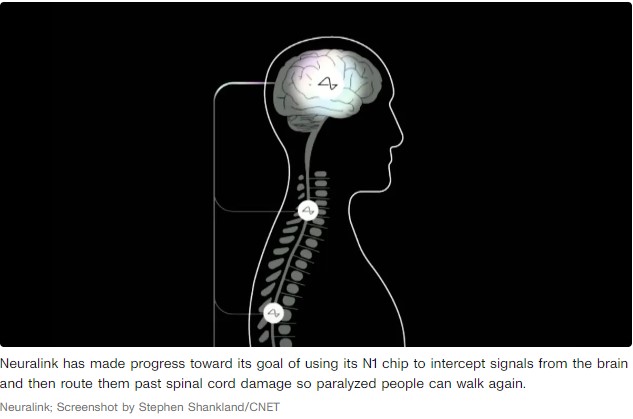 Neuralink, the startup Elon Musk founded to link our brains directly to computers, showed progress Wednesday in two medical areas: helping blind people to see and helping people with spinal cord injuries to walk or use their hands.

The company, one of five that Musk leads, is working on technology to drop thousands of electrodes thinner than a hair into the outer surface of human brains. Each electrode is a tiny wire connected to a battery-powered, remotely recharged, quarter-sized chip package that’s embedded into a spot that once held a circle of skull. The chip, called the N1, communicates wirelessly with the outside world.

The technology is still far from the initial medical uses, much less Musk’s ultimate vision of using Neuralink to hang out with superintelligent AIs. But the company is making significant progress, including applying with the Food and Drug Administration to begin human trials it hopes to start within six months, the company said at a “show and tell” event lasting more than two hours.

“Our goal will be to turn the lights on for someone who’s spent decades living in the dark,” said Neuralink researcher Dan Adams, who’s working on the effort to repackage camera data into a brain-compatible format and pipe it directly to the visual cortex.

Musk has some cred when it comes to revolutionary tech. His electric-vehicle company Tesla is profoundly changing cars and his SpaceX outfit is transforming space access with reusable rockets. His reputation as a tech genius has taken a beating, though, with the chaos at Twitter after his $44 billion acquisition. Musk’s Boring Company, which aims to revamp auto transportation with tunnels, also hasn’t lived up to its promises yet.

Neuralink doesn’t look any easier than social networking. Connecting computer hardware to our own wetware comes with enormous technical, regulatory and ethical challenges. Helping the blind see is one thing, but a digital feed straight into our brains might not help those of us who already spend too much time on our phones.

Previously, Neuralink showed how its electrodes can listen in on brain activity. By capturing the brain signals from a monkey named Pager that played the classic Pong videogame, Neuralink computers learned to interpret motor control signals. Later, the monkey’s brain signals alone could control the game.

At Neuralink’s “show and tell” event, designed to recruit new talent, the company showed a new trick: A monkey named Sake used its mind to follow prompts and type on a virtual keyboard. The implants charge wirelessly, with monkeys coaxed by a fruit smoothie to sit beneath a charger embedded in a branch immediately above their heads.

But Wednesday’s biggest developments used those same electrodes to send signals back to the neurons that make up the brain and nervous system.

One experiment used electrodes in a pig’s spinal cord to control different leg movements, a technology that could lead eventually to helping people with quadriplegia walk or use their hands. Neuralink’s approach involves not just intercepting the brain’s movement commands and shunting them to the legs, but also hearing the sensory signals from those extremities and sending them back to the brain so the brain knows what’s going on.

“We have a lot of work to do to achieve this full vision, but I hope you can see how the pieces are all there to achieve this,” said Joey O’Doherty, a researcher working on Neuralink’s motor control technology.

Seeing images and typing with your mind

Another experiment fed visual data captured with a camera into a monkey’s visual cortex, showing it virtual flashes the monkey interpreted as being in different locations. That’s technology Neuralink hopes will lead to a visual prosthesis for blind people.

The first-generation Neuralink technology uses 1,024 electrodes, but Neuralink showed off next-generation models with more than 16,000 electrodes. That much detail would dramatically improve the fidelity of the image a blind person could see, Adams said.

“If you put a device on both sides of your visual cortex, that would give you 32,000 points of light to make an image in someone who’s blind,” Adams said.

Another Neuralink application is letting paralyzed humans use their implants for mind typing.

“We’re confident that someone who has basically no other interface to the outside world would be able to control their phone better than someone who has working hands,” Musk said.

Neuralink is not alone

Neuralink isn’t on its own in pursuit of brain-machine interface (BMI) or brain-computer interface (BCI) technology. Academic researchers have produced a steady stream of research papers, and startups like BlackRock Neurotech, Precision Neuroscience, Synchron Medical and Paradromics also are active. Some, like Nuro, employ noninvasive approaches that require no surgery.

Synchron began human trials in April with six patients using a device to try to help people with paralysis. Blackrock has completed some and is recruiting for others, like one experiment to see if a computer interface can help people speak. Another, intended to digitally reconnect extremities to the brain, began in 2013, years before Neuralink was founded.

One thing that separates Neuralink from some of those efforts is the goal of mass production.

“Production is hard – I’d say 100 to 1,000 times harder to go from a prototype to a device that is safe, reliable, works under a wide range of circumstances, is affordable and is done at scale,” Musk said. “It’s insanely difficult.”

Musk envisions Neuralink making millions of brain chips and said he expects to have one himself. To reach that goal, the company is trying to automate as much of the technology as possible. Its R1 robot threads electrodes into the brain without damaging blood vessels, but a next-gen machine is designed to handle more of the surgery, including cutting through the skull.

Neuralink also is working on locating its brain chips one layer farther from the brain, on the outside of a layer called the dura. That requires major changes to robot’s needles and needle steering systems, upgrades the company is working on today.

“There’s not that many neurosurgeons – maybe about 10 for a million people,” said Christine Odabashian, who leads Neuralink’s surgery engineering team. “For us to do the most good and have an affordable and accessible procedure, we need to figure out how one neurosurgeon could oversee many procedures at the same time.”

Another big difference between Neuralink and its rivals is Musk’s sci-fi vision.

The company’s ambitions are grand: “A generalized input-output device that could interface with every aspect of your brain,” Musk said. But the long-term plan is much grander.

“What do we do about AI, about artificial general intelligence?” Musk asked. “If we have digital superintelligence, much smarter than any human, how do we mitigate that risk at a species level? Even in a benign scenario where the AI is very benevolent, how do we even go along for the ride? How do we participate?”

In Musk’s mind – conceptually only for now, but maybe eventually physically, too – the answer is Neuralink.