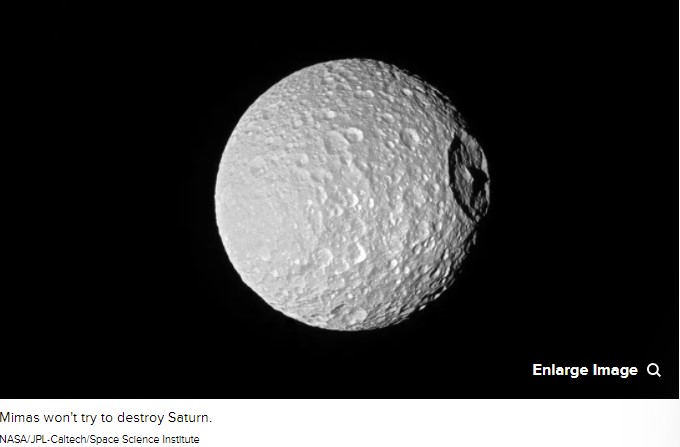 Saturn has some famous moons, like Enceladus (a plume-spewing moon of mystery) and Titan (the intriguing target of NASA’s future Dragonfly mission). But what about dainty Mimas, a moon that’s mostly known for its resemblance to the Star Wars Death Star? Turns out it might be hiding an ocean.

A study published in the journal Icarus lays out evidence that suggests Mimas has liquid deep under its icy surface. “If Mimas has an ocean, it represents a new class of small, ‘stealth’ ocean worlds with surfaces that do not betray the ocean’s existence,” said lead author Alyssa Rhoden in a Southwest Research Institute (SwRI) statement on Wednesday.

Mimas might look quiet, but NASA’s now-defunct Saturn-studying Cassini spacecraft “identified a curious libration, or oscillation, in the moon’s rotation, which often points to a geologically active body able to support an internal ocean,” SwRI said.

The libration spotted by Cassini suggests Mimas’s interior is warm enough for a liquid ocean, but not so warm it compromises the moon’s thick shell of ice. The researchers calculate that ice shell could be up to 19 miles (31 kilometers) thick.

There’s a nifty acronym for interior water ocean worlds: IWOWs. Known IWOWs include Enceladus, Titan and Jupiter’s fascinating moon Europa. These places are particularly interesting because they may be habitable for microbial life. The bigger moons tend to have geologic activity on their surfaces that hints at what’s going on below. Mimas, however, is doing a good job of hiding its liquid, if it does exist.

“Turns out, Mimas’ surface was tricking us, and our new understanding has greatly expanded the definition of a potentially habitable world in our solar system and beyond,” Rhoden said.

The researchers aren’t ready to declare Mimas a sure-fire IWOW just yet. There are still questions around its formation and evolution. Rhoden called it a “compelling target for continued investigation.”